Up front it's important to say that I respect and like a fair bit of what MS are doing in the cloud arena lately, and in general. Their update cycle for a *lot* of their applications, and services, both cloud and software based has become a lot more open, and (where required) a faster turnaround on versions is there.

I've swung back their way from Google Suite in recent years, due to the emergence of office.js (now renamed) and their flow ("Power Automate" **puke** ) is an absolutely *stunning* product. But that is all for the corporate layer, and let's face it, Linux is still a spit-show for ease of use, and not everyone is rich enough to afford a Mac.

Before we go on, I'll quote the Microsoft tech I spoke to who clearly is aware that this is not a good thing, but doesn't have a choice in how it's laid out:

I totally understand that my friend, honestly I would love to provide you with any other answer or solution for this however that's the best way to proceed right now! I totally understand as well how you feel about the programs, accounts, etc. being sent to Microsoft. One thing I can definitely assure you is that all of your info is always highly protected.

He said (before and after that) that this is now how things are, and how Windows works, and it won't change back.

SO! ... Remember when Microsoft decided to make it *very* difficult to create a local account? Well they're now trying to catch existing local users, and really, I can't find many people that are talking about it ... and guess what ... they're basically calling it a 'feature'. It's Vista/Me all over again.

Basically ...
Microsoft have removed all pretence of letting Windows 10 be a usable system without you phoning home every time you do anything.

I'll use XBox as an easy example, but many of the reports actually revolve around Office, and other software, not to mention the complete removal of the "for this app only" functionality in the Microsoft (Windows) Store. The XBox one is a kicker for me, as that is one reason I spunked ~£400-500 on a black box for games that I rarely use anymore.

Basically (in my example) if you've tried to use the XBox Console Companion or remote play your XBox in any fashion whatsoever over the past year you'll have maybe been re-prompted for the login. Since the May 2019 Update this now makes your entire Windows profile a connected one, immediately, and that's irrespective of which ever of the two options you choose to use with the login. 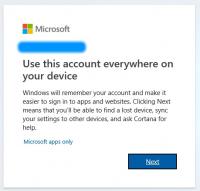 Sure you can do some heavy lifting and revert it, but the damage is now done, your PC, your Windows licence, your Microsoft ID, are all tied together now ... out therrrrreee. Their sneaky sneakster is that "for Microsoft apps only" includes Windows because ... guess who makes that.

Additionally, this will potentially 365'ify your 2016/2019 office installs, and it'll certainly connect them to your account (an irritation if they're not initially done via that) or link them tangentially. It'll also connect the account to all Microsoft software if you chose the option that you *thought* was the old "for this app only."

I actually noticed this last year, but was concentrating on a job so couldn't report openly. I actually didn't go through with it, but I've had an hours long support conversation with Microsoft confirming that this is the (heh) 'new normal' with Windows 10, and that there's no going around it. I only noticed because I've been a little more heightened since starting to (barely) lock down local group policy, firewall, task scheduler, sides, etc.

This also comes up if you're trying to install a lot of free stuff from the store ... I *think* that you can still install them by simply closing the box (and the store will just go ahead and install Dolby or whatever) but I'm not entirely sure and am not going in to that hellscape to check.

Obviously I'm posting this here purely as a warning to you lovely lot ...

So if if anyone knows how to hack Windows to disable this abhorrent nonsense, please feel free to pipe up if you know which registry line to edit, files to edit/delete/rename, or fancy Windows Firewall and Task Scheduler rules to enable.

(DM me if you don't want them to know you know!)

I'll put a holding second post for extra information and / or confirmed work arounds (or even a fix!

...) to give an editable spot if this ever expands beyond the ramblings of a tired Moony.

---------------
Here's four incidents that manifest this problem (I found more): FWIW - Purely on the XBox side, one XBox helper (not official, just a gamer) tried to help with a "Xbox Identity Provider app" fix, but that particular app required ... you guessed it ... a MS Store acc.