by skriptimaahinen
Noscript 10 does not appear to block web-fonts if they are provided as data:

The icons for search (hae) and menu (valikko) are provided by the font-face above.

by skriptimaahinen
This is still an issue (Noscript Version 10.1.6.4). If additional info is needed, please ask.

by Giorgio Maone
NoScript treats data: URIs for embedded resources as same origin with the document (even though when they represent HTML documents they've been recently demoted to null origin, making them safer than before because scripts couldn't access parent resources).
Therefore unless fonts are enabled for yle.fi, data: fonts shouldn't be rendered.

I suspect what you've actually noticed is the font being aggressively cached by Firefox.
Steps to reproduce: Please let me know if you observe anything different, thanks.

by pal1000
Thanks for the response. I personally would like to wait for the original bug reporter to reply as the difference between with and without fonts is not so obvious on that page or probably my eyesight is not the best.

by skriptimaahinen
Ah, sorry, have not been paying attention to this report for a while.

Attached image to show difference between unblocked and blocked. 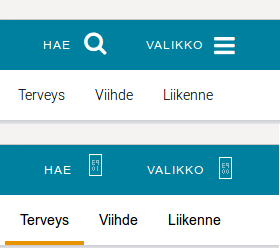 As far as I can tell, Noscript currently blocks fonts only in onBeforeRequest, that is, if they are actually "fetched". So I don't see how it would block data: URIs. That said, I made a little patch that fixed the problem for me.

So simply checking if fonts are allowed (canFont) and respectively adding the "font" to "blockedTypes" to create the font-src:'none' CSP rule. Just like it's done with scripts.

by Giorgio Maone
Thanks for the patch.
Sorry, when I reviewed your PoC I was looking at the readable fonts on the toolbar and completely missed the icon font.
Actually I'd expect onBeforeRequest to intercept data: URIs on Firefox (unlike Chrome, which doesn't) based on the original WebExtension API implementation, so I'm gonna investigate further.
I'll consider also merging your patch, but as far as I can see there's an important difference with the expected behavior, i.e. it would block any font load on the page, not just data:
Thanks again

by skriptimaahinen
Sorry, should have pointed the difference out. Also worth noting explicitly is that with the patch, if one wishes to allow/use fonts (awesome, gstatic, etc.) on some page, they are also forced to set that domain as allowed SOURCE of fonts. I wonder how big of a problem that is?

Related, how big of a threat are webfonts these days? It's been almost ten years since webfonts were introduced. One would assume that the font parsers have matured since.


skriptimaahinen wrote:Sorry, should have pointed the difference out. Also worth noting explicitly is that with the patch, if one wishes to allow/use fonts (awesome, gstatic, etc.) on some page, they are also forced to set that domain as allowed SOURCE of fonts.

I've modified your patch to work-around this limitation. Now it should work as expected: 3rd party fonts permissions independent from 1st party, either HTTP(S) or data:/blob:


skriptimaahinen wrote: Related, how big of a threat are webfonts these days? It's been almost ten years since webfonts were introduced. One would assume that the font parsers have matured since.

by skriptimaahinen
Aah, didn't even consider such blank permission as a possibility for the CSP. Very nice.

However, there is still a minor issue with the "needed" marker not updating for the font. Unfortunately the https://yle.fi/uutiset was not the best site to test this as there were "normally" fetched fonts alongside the data-fonts, so the marker was set anyhow. Better site for testing would be plain https://yle.fi as there the only font is the data-one.

The issue seems to culminate around popup.js/initSitesUI, where the "seen"-messages with data-urls get filtered out due to the parsers not being able to handle them.

Maybe give them few more years then...

by skriptimaahinen
Everything seems to be in order now. Thank you!
All times are UTC
Page 1 of 1
Powered by phpBB® Forum Software © phpBB Limited
https://www.phpbb.com/